A Seaman On A Regular Freighter Died Of A Heart Attack 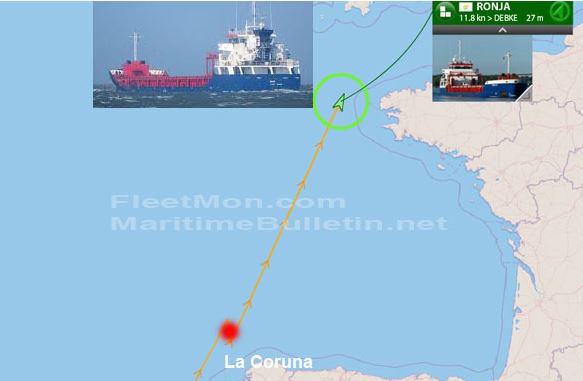 On the evening of September 17, in the Bay of Biscay in the northern part of A Coruña, Spain, a 45-year-old Russian seaman aboard a general cargo ship "RONJA" suffered a heart attack and was in critical condition and requested immediate medical assistance. .

The ship was sailing from Aveiro Potudal to Breck, Germany. The ship changed course and headed towards A Coruña, and Spanish rescue helicopters have raced against time for medical rescue. The seaman was airlifted to A Coruña.

But unfortunately, the seaman was declared dead on arrival. Eventually, the ship resumed sailing.

Sailing is important, but the health of the crew is no exception.

A similar accident has been reported in the shipping industry. On September 12, the captain of the asphalt tanker "GLOBAL LADY" suddenly died in the cabin of the "GLOBAL LADY" due to a heart attack in the Arabian Sea. For details, see "Emergency! Sudden death of the captain + injury to the crew.

Ship accidents happen frequently, and the crew is exhausted physically and mentally, so be careful!

Previous:Antwerp Digitalizes The Container Release Process Next:Vietnam Airlines Will Open A One-way Flight From Vietnam To Japan From September 18.